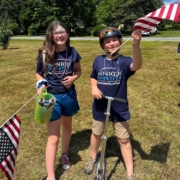 On 4th of July at the start of the Fairlee Parade, everybody was going to their spots in the line and getting everything ready. I was in Monique Priestley’s group, and there was probably around 25 people in the whole group. We all had American flags, candy, matching T-shirts, signs, or red white and blue accessories. I decided to throw candy, have a flag, and set off powder cannons. They were kind of like confetti cannons, except with red or blue powder.

Once we started moving, I could tell that everyone was excited, including me. People were by the side of the road cheering, and me and some other people in my group were throwing candy to the kids. As we walked down the street and across the bridge, I saw some of my friends and teachers watching the parade and cheering. A few minutes in I set off the first powder cannon, that had blue powder inside. It made a loud bang and blue powder flew everywhere, getting splotches of blue on my face! I did a few of these, some red, some blue, and every time I did it got on my face and everyone was laughing!

Close to the end my feet started to hurt, and my legs were getting tired from walking. Pretty soon though the parade ended, and I got to stand by the side of the road to watch other groups in the parade go by. This was my first time being in a parade, and I didn’t want it to end! Overall this was a very fun and exciting experience, and I’m so glad that I got to join Monique’s group and be in the parade.

Field Notes from Grace: My First Week of Door Knocking
Scroll to top